The CW's Upfront is an annual event held by The CW for everyone that works on their network. 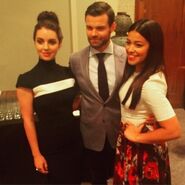 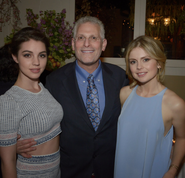 Adelaide Kane and Megan Follows makes their entrances at the 2014 CW Upfront Presentation held at The London Hotel oin New York City on May 15.

“Lola getting pregnant, that was the big thing for me,” Adelaide said. “I was like, ‘What!’”

“The baby! I don’t know about the baby. That will be interesting,” Megan added about her character. “How would she feel? That’s very complicated because that would be my blood. I think I would be happy, but I don’t know how I would need to control that. I don’t like things that I can’t control.”

Adelaide Kane dons two different looks for the 2013 CW Upfront Presentation held at The London Hotel in New York City on May 16.

11:30am: After the cutdown of “Reign,” Adelaide Kane walks on stage in the regal, period garb of her character on the show — something no other thesps have done during the week’s presentations. It’s a nice touch, and makes her stand out in the endless talent crowd.

Reign, follows Mary, Queen of Scots who has been the Queen since she was six days old. The teenage Mary is already a headstrong monarchm beautiful, passionate, and poised at the very beginning of her tumultuous rise to power. Arriving in France with four close friends as her ladies-in-waiting, Mary has been sent to secure Scotland’s strategic alliance by formalizing her arranged engagement to the French king’s dashing son, Prince Francis.

But the match isn’t signed and sealed, it depends more on politics, religion and secret agendas than affairs of the heart. While at French Court, fierce foes and dark forces conspire to sabotage Mary’s marriage to Francis and even threaten her life, until a mysterious shrouded guide becomes her ally. With danger and sexual intrigue around every dark castle corner, Mary rallies her ladies-in-waiting and steels herself, ready to rule the new land and balance the demands of her country and her heart.

Add a photo to this gallery
Retrieved from "https://reign.fandom.com/wiki/The_CW%27s_Upfront?oldid=27666"
Community content is available under CC-BY-SA unless otherwise noted.