View source
watch 02:56
Doctor Strange in The Multiverse o Madness - The Loop
Do you like this video?
Play Sound

Mary Tudor (Mary I) was Queen of England and Ireland for 5 years from July 1553 until her death on November 17, 1558. She was the daughter of King Henry VIII and Catherine of Aragon. She was Mary I of Scotland's first cousin once removed. They have never met, and have only heard of each other. Mary Tudor's father, King Henry VIII is the younger brother of Mary Stuart's grandmother, Margaret Tudor.

Mary was born a princess, but after her mother, King Henry's first wife Catherine of Aragon, was divorced in favor of Anne Boleyn, she was ignored and declared illegitimate by her father until he had his third wife, Jane Seymour. She was the first born child of King Henry.

Pilot - (Mentioned)
Queen Mary I ordered an attempt on the life of Mary Stuart at The Convent. It failed, and the Scottish Queen was sent to French Court.

Snakes in the Garden - (Mentioned)
Mary Stuart talked with Simon Westbrook, rumors that Queen Mary Turdor was ill, and her cousin Princess Elizabeth might be next in line for the throne. But many think she's illegitimate and a bastard born. And the next rightful heir to the English throne should be Mary Stuart.

Fated - (Mentioned)
King Henry II anounced the Tudor Queen was dying. She had not named her successor but many believe the rightful heir to the English throne should be Queen Mary Stuart. The second England's queen dies, King Henry wanted Mary Stuart to make her claim. Her marriage to Prince Francis would be moved up as it would strengthen her claim, and would show Europe that Mary Stuart had the might of France at her side.

King Henry stated a new condition of Scotland and France's marriage alliance is that Mary Stuart deliver England to France. Support from The Vatican made him think he can get it, However, Queen Catherine cautioned Princess Elizabeth will have support as well. Armies she'd been gathering for years. Laying claim to England could cost Mary Stuart her head, as it did Lady Jane Grey.

When the English Queen dies, so would Henry the VIII's legitimate line, as Mary Stuart is his next relation by blood, because Elizabeth is King Henry VIII's daughter by Anne Boleyn and her parents' marriage was never recognized by The Catholic Church. Elizabeth is Protestant and The Pope doesn't want to lose a nation to Protestantism. However, a Scottish Queen on the English throne, a daughter born of one of Henry's wives, dismissed would cause uprisings and wars.

For King and Country - (Mentioned)
King Henry told Mary Stuart that she would lay claim to England once the English Queen, Mary Tudor was dead.

The Vatican support Mary Stuart's claim to the English throne. However, Mary Stuart would only agree if Sebastian was named King Henry's heir. Mary and Sebastian's ascent to the throne would not be official until The Pope agreed, and that would not be easy. King Henry decided to go to Rome himself, to ensure the marriage of future King and Queen of France, Scotland and England.

Unfortunitly, Queen Catherine would never agree to an annulment. Tho when King Henry dies, Bash will become king. If Bash is survived by King Henry and Queen Catherine's children, the line of succession will revert back to King Henry's sons by Catherine.

Consummation - (Mentioned)
A massager arrived at the French Kingdom and announced the death of the Queen of England, claiming that she had not declared a successor before her death. King Henry claimed England is Mary Stuart's by bloodline, and insisted she lay claim to it immediately, or Princess Elizabeth will seize it. King Henry insisted if Mary Stuart wanted to take England, should would need the next king of France by her side, and demanded she would wed one of his sons that night.

After Mary and Francis' Wedding it was discovered that Mary Tudor had not passed away, and was still alive ruling England. The whole think was a play her Mary's mother, Marie de Guise.

The Darkness (Mentioned)
King Henry demanded to know from Queen Catherine when the 'English Bitch' would die, and stay dead.

Higher Ground (Mentioned)
Mary Tudor lost her beloved city of Calais as it was taken back by the French.

Fight or Flight - (Mentioned)
Queen Elizabeth bought up how Gideon Blackburn used her, made her care for him. But he couldn't make her fall in love with him, because she were in love with Robert Dudley. Which he reported back to her half-sister. Gideon was Mary Tudor's eyes and ears, sent to inform on Elizabeth, the greatest threat to her crown. So she ripped Robert from his cell and Elizabeth's side.

Bruises That Lie - (Mentioned)
While talking with Lady Lola, Elizabeth mentioned how Royals have such a strange sense of family. Her father, King Henry VIII cut off her mother, Anne Boleyn's head. her sister, Mary Tudor jailed her as a threat to her rule. And how Lola had King Francis's bastard son, John Philip.

Succession - (Mentioned)
Gideon Blackburn warned Mary Stuart that Queen Elizabeth would see her raising a Catholic army as an act of aggression. Even if it was to stop John Knox. As The Vatican has been determined to reclaim England ever since she turned the country Protestant after Mary Tudor her Catholic sister died.

Strange Bedfellow - (Mentioned)
Mary Stuart begain looking for any Catholic males in the line of succession. The most likely candidate was distant cousin of her and Elizabeth's named Joseph Tudor. After Mary Tudor died and Queen Elizabeth turned England Protestant, Joseph fled to France. Joseph Tudor appealed to King Henry and Queen Catherine for asylum when Elizabeth took the throne, and started persecuting all of Mary Tudor's Catholic supporters. As France is a Catholic monarchy, King Henry granted him sanctuary.

Leaps of Faith - (Mentioned)
Lady Lennox told Mary Stuart that what Mary see as a solution for peace, she see as her demise. After Queen Elizabeth's mother, Anne Boleyn's execution, after her sister Mary Tudor imprisoned her, even after the most recent attempt on her life, Elizabeth will never rest easy. It is not in her nature.

Hanging Swords - (Mentioned)
Gideon Blackburn asked Queen Elizabeth is what she told his daughter, Agatha Blackburn about heaven came so easily to her was because it's what she told yourself as a child. Elizabeth confirmed her father, King Henry VIII wanted little to do with her, and her mother, Anne Boleyn was killed before she turned three. Later her sister, Mary Tudor locked her in The Tower of London and accused her of treason, and she never knew if they were coming for her next. So she told herself that story so she wouldn't be afraid.

Other Faces of Mary Tudor 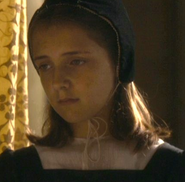 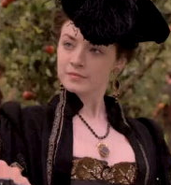