Mary Boleyn was the sister of English Queen consort Anne Boleyn and a member of the Boleyn family, which enjoyed considerable influence during the reign of King Henry VIII of England

Mary grew up at Hever Castle, Kent. She was the daughter of a rich diplomat and courtier, Thomas Boleyn, and to Lady Elizabeth Howard.

grammar, history, reading, spelling, and writing. As well as the feminine accomplishments of dancing, embroidery, etiquette, household management, music, needlework, and singing, and games such as cards and chess. She was also taught archery, falconry, riding, and hunting.

Mary was sent to France at 15 to be a Lady-in-Waiting to their King’s sister, Lady Mary Tudor, who was going to Paris to marry King Louis XII of France. Even when Mary Tudor left France after she was widowed, Mary remained behind, during the next 5 years she had an affair with King Francis I before returning to England and becoming a Lady-in-Waiting to Catherine of Aragon.

After Anne's return, Mary married William Carey, a wealthy and influential courtier. King Henry VIII was a guest at their wedding. At some point, Mary became Henry's mistress when she was around 22. The liaison was never publicized, and Mary never enjoyed the fame, wealth, and power that Henry's earlier mistresses enjoyed. Her first child, Catherine was born in 1524. Their affair was presumed over by the birth of her second child.

Her sister Anne returned to England in January 1522 and joined the royal court as one of Queen Catherine's Ladies-in-Waiting. Anne achieved considerable popularity at court, although the sisters already moved in different circles and were not thought to be particularly close.

Anne was more ambitious and intelligent, so when King Henry took an interest in her, she refused to become his mistress, not to give in to his sexual advances and returning his gifts. By the middle of 1527, Henry was determined to marry Anne. So the next year when Mary's husband died during an outbreak of sweating sickness, King Henry granted Anne Boleyn the wardship of her nephew, Henry Carey. Mary's husband left her with a large debt, and Anne took care of it, and even secure her widowed sister an annual pension of £100.

Queen Catherine mentioned how The Boleyn Sister worked together and it worked out for only their father. Catherine was referring to Anne Boleyn and Mary Boleyn. Mary Boleyn was Henry VIII's mistress, although Anne Boleyn refused. Years later, Anne refused to sleep with King Henry until he divorced his first wife and married her. Anne later gave birth to Elizabeth Tudor. However Henry beheaded Anne, and Mary had left court years earlier.

Other Faces of Mary BoleynEdit 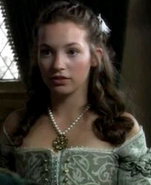 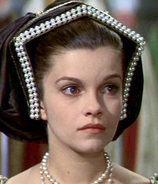 Retrieved from "https://reign.fandom.com/wiki/Mary_Boleyn?oldid=40477"
Community content is available under CC-BY-SA unless otherwise noted.