Kingdom of Sweden is a proud and very traditional kingdom and ruled by the 28 year old King Eric XIV of Sweden.

* 1542–and onward
Prince Eric Vasa made unsuccessful marriage proposals to, Mary, Queen of Scots and Queen Elizabeth of England. 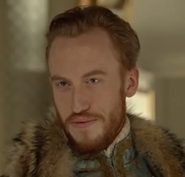 Prince Magnus of Denmark
Add a photo to this gallery

Retrieved from "https://reign.fandom.com/wiki/Kingdom_of_Sweden?oldid=40132"
Community content is available under CC-BY-SA unless otherwise noted.