Henry Tudor (Henry VIII) was the King of England for 38 years from April 21, 1509 until his death on January 28, 1547. He was the Lord of Ireland, and later assumed the Kingship, and continued the nominal claim by English monarchs to the Kingdom of France. He was the son of King Henry VII and Elizabeth of York. He famously had 6 wives and four children that made it to adulthood. He was the father of the current monarch of England, Queen Elizabeth, as well as the father of her three half siblings; Henry Fitzroy, Mary Tudor, and Edward Tudor.

He was born the third child and second son of Henry VII of England and Elizabeth of York. Henry became the heir to the English throne when his older brother, Arthur died. He became King at the age of 18 when his father died. Henry married his first wife Catherine of Aragon that same year. They stayed married for 24 years until he met Anne Boleyn. However when Pope Clement VII refused to annul his married Henry broke away from The Catholic Church creating The Church of England.

King Henry of France announced that Mary Tudor of England was dying. Once she was declared dead, he wanted Mary Stuart of Scotland and his son, Prince Francis to already be married and to take England together with Mary as the new Queen, skipping over Henry VIII 2nd daughter, Elizabeth, since she was Protestant.

Mary said she could not, as Elizabeth was Henry's own blood. Her England rejected her as their Queen, it would mean her death.

Mentioned in conversation between Mary Stuart and Lord McKenzie while talking about The Battle of Solway Moss during the The Scot's Welcome Celebration.

Pietro de' Medici made a reference to Queen Catherine about the time some of King Henry VIII's wives practiced laying their head on the chopping block before their execution.

Queen Catherine mentioned how The Boleyn Sister worked together and it worked out for only their father. Catherine was referring to Anne Boleyn and Mary Boleyn. Mary Boleyn was Henry VIII's mistress, although Anne Boleyn refused. Years later Anne did become his mistress, but refused to sleep with King Henry until he divorced his first wife and married her. Anne later gave birth to Princess Elizabeth Tudor, but was beheaded when she was three, so King Henry would marry his 3rd wife.

William Cecil insisted Queen Elizabeth find a housband of more nobal birth then Robert Dudley. As she was the daughter of a King. Insisting legitimate or illegitimate, royal blood flowed in her veins and it was time she found herlself a husband.

Queen Elizabeth mentioned to Lady Lola how royals have strange family loyalty. Brining up how her father cut off her mother's head. And her sister had her jailed.

The Kingdom of England celebrated his ‏50 Year Coronation Celebration‏. A portrait of himself caould be seen behind Lady Lola when talking to his daughter Queen Elizabeth. After the celebration, and while in prison, Anne's former best friend Beatrice Somerset and Lady Lola are both arrested. While in jail, Lady Beatrice Somerset told Lady Lola the story of Anne Boleyn and King Henry VIII. She asked Lola if she'd heard the stories, the lady who sold out her dearest friend and her infant daughter. She told those outlandish tales Anne was guilty of witchcraft and other depravities. Because everyone knew Henry wanted her gone, so to speak ill of Anne was to curry favor with the king. A chambermaid of Anne's claimed to have seen Anne and her brother George Boleyn together. But King henry knew no one would believe it unless it came from someone like her, a close friend to Anne. He turned the screws on her family with threats and promises. After the trial, Henry awarded her The Boleyn family lands. Henry knew the chambermaid's story was a lie. The only thing Anne was ever guilty of was not having a son. She cried while adding she didn't know how often she'd wished I could speak with Queen Elizabeth to explain about Anne.

Three days after Beatrice was allowed to leave with her head after she gave back The Boleyn land she had been given 22 years earlier.

Playing With Fire - (Mentioned)
Gideon Blackburn told Elizabeth the Pope doen'st like her. She reminded him, The Pope does not like her because England stopped stuffing gold in Rome's pockets when her father left the faith.

Lord Maxford was telling the English Court how he was there when His Majesty faced the boar, armed with only a spear, because King Henry VIII was no ordinary man. "The Hunting King," everyone called him. Lord Maxford then mentioned how he miss the days when men were men and kings were kings. Later William Cecil reminds Elizabeth she is her father's daughter, and she goes out of a Royal Hunt. Snagging a huge bear infront of all the Nobles.


Hanging Swords - (Mentioned)
Gideon Blackburn asked Queen Elizabeth is what she told his daughter, Agatha Blackburn about heaven came so easily to her was because it's what she told yourself as a child. Elizabeth confirmed her father, King Henry VIII wanted little to do with her, and her mother, Anne Boleyn was killed before she turned three. Later her sister, Mary Tudor locked her in The Tower of London and accused her of treason, and she never knew if they were coming for her next. So she told herself that story so she wouldn't be afraid.

Pulling Strings - (Mentioned)
Queen Elizabeth brought up how her father, King Henry VIII killed her mother Anne Boleyn so he could re-marry because he wanted a son.

A Better Man - (Mentioned)
Elizabeth wants a husband "who will not have her head removed.' This is a reference to her father, King Henry VIII having her mother, Anne Boleyn beheaded.

All It Cost Her - (Mentioned)
Jane helped kill Gideon Blackburn because of what Elizabeth's father, Henry VIII did to her grandfather. He worked for Henry VIII, and when he didn't polish his ring to his liking, the king sawed off his finger with a butter knife. He was then sent home, the wound stank, his veins turned black, and he screamed in pain for two full days until he died.

Other Faces of King Henry VIIIEdit 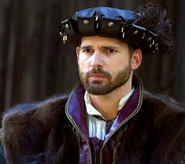 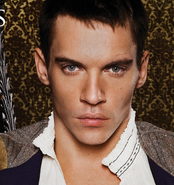 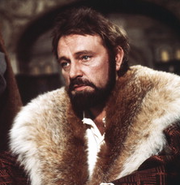 Retrieved from "https://reign.fandom.com/wiki/King_Henry_VIII?oldid=43554"
Community content is available under CC-BY-SA unless otherwise noted.