George Boleyn was an English courtier and nobleman, and the brother of Queen Anne Boleyn. This made him the brother-in-law of King Henry VIII and the maternal uncle of Elizabeth Tudor. A prominent figure in the politics of the early 1530s, he was convicted of incest with Anne during the period of her trial for high treason. They were both executed.

George was the only surviving son of the courtier and ambassador Sir Thomas Boleyn and his wife, Lady Elizabeth Howard.

Thomas and Elizabeth had a number of children, including two sons named Thomas and Henry who failed to reach adulthood. Three children survived: George, Mary and Anne Boleyn. George was about 27 when he gained a place on the Privy Council in 1529. In addition to Cavendish's verses, foreign diplomats believed George was too young to be appointed as Ambassador to France in October 1529.

Like his father, it was understood that George would have a career as a courtier, politician and diplomat. The monarchy was the font of all patronage and potential wealth and it was only through service to the Royal Family that a family could hope to achieve or protect their greatness and social position. With this in mind, George was introduced to Henry VIII's court at the age of ten, when he attended the Christmas festivities. Thanks to his family's influence and the fact he'd impressed Henry, he became one of the King's pageboys shortly afterwards.

Since learning was highly praised at Court and essential for a career as a diplomat, George received an excellent education, speaking fluent French and some Italian and Latin. Although his two sisters were educated abroad, George remained in England throughout his formative years. There is a long-standing tradition that George attended the University of Oxford when he was not in attendance at Court, although he does not appear in any of the university's records.

George married Jane Parker sometime during 1525. They were certainly married by January 1526 because a note of that date in Wolsey's hand confirms that an extra £20 a year had been awarded to "young Boleyn for him and his wife to live on".

There has been much speculation as to whether the marriage of George and Jane was happy or not. There is no mention of the couple having any children, which as the brother-in-law and sister-in-law to the King of England, there would have been a record. George possibly had a reputation as a womaniser. For all George's good looks and talent, Thomas Wyatt, who was a friend of the Boleyns', also says that George was too proud. Despite his pride Wyatt acknowledges that at his death many cried out loud that his death was a great loss.

George is first mentioned as an adult in 1522 when he and his father received a joint grant of various manor houses in Kent. He received the first grant in his sole name in 1524, when at the age of 20 he received from the King a country mansion, Grimston Manor. Possibly as an early wedding present made to a young man who was rapidly coming into favour. He was a firm favourite of the King and is regularly mentioned in the Privy Purse expenses as playing the King at bowls, tennis, card games and archery. He also hunted with the King and bet large sums of money with him. He won huge sums off the King but probably lost just as much, if not more. Gambling was one of the European aristocracy's favourite pastimes in the period.

In 1525, George was appointed gentleman of the Privy Chamber, functioning as the male equivalent to the King of what a Lady-in-Waiting was to the Queen. Cardinal Wolsey ensured that George lost this position six months later when he halved the number of gentlemen in the Privy Chamber. As compensation, George was appointed Royal Cupbearer in addition to his award of an additional £20 a year for him and his wife to live on.

Following Mary Boleyn return to England in 1519, she became Henry VIII's mistress for an unknown amount of time. Bt 1526 the King's eyes turned to Anne Boleyn, and by 1527 he was seeking to marry her. Much of George Boleyn's career was in furtherance to the King's desire for a divorce from his first wife Catherine of Aragon.

In June 1528, George contracted the disease known as sweating sickness whilst with Henry and Catherine at Waltham Abbey. In a letter to Anne, who also contracted the disease while at Hever Castle, Henry told her of her brother's illness and recovery. Later that year, George was appointed Esquire of the Body and Master of the King's Buckhounds in 1528. Throughout the late 1520s grants continued to be bestowed upon him. On 15 November 1528 he became keeper of the Palace of Beaulieu and on 1 February 1529 was appointed chief steward of Beaulieu and in July he was appointed Governor of Bethlehem Hospital.

George's diplomatic career took off in late 1529 when he was knighted and regained his former position as a member of the Privy chamber. It was also in December that he was ennobled as George, Viscount Rochford, and undertook his first assignment as a diplomat to France as Ambassador. Because he was 25, it is possible that Anne's influence secured him this post.

George quickly established a good relationship with the King of France, King Francis I. George encouraged King Francis to write a strong letter in favour of King Henry VIII's divorce, which was later used to reverse the universities' decision. They met again when in March 1533 he informed the King of France of his sister's marriage to the King of England. George was instructed to encourage Francis into giving Henry more support, following a lengthy debate George succeeded in obtaining a letter from him asking the Pope to concede to Henry's wishes.

George was the one to inform Henry VIII that Pope Clement VII excommunicated him. In April 1534 George arrange a meeting between the two Kings and Anne. In July George had to return to rearrange the meeting that had been arranged between the kings as a result of Anne's pregnancy (she later miscarried).

George's final embassy was in May 1535 when he and his uncle were appointed by the King to negotiate a marriage contract between the King of France's third son, Henry III of France and the baby Princess Elizabeth.

In 1536, Anne Boleyn miscarried a son. Her failure to provide King Henry with a male heir coincided with Henry's infatuation with Jane Seymour, one of his wife's maids-of-honour. To rid himself of his wife, Henry and his chief advisor, Thomas Cromwell, devised a plot whereby Anne was accused of adultery with five men, one of whom was her brother, George. George was charged with incest with the Queen and plotting with Anne to kill the King.

Anne and George were arrested on 2 May 1536 the day after the May Day joust at which George was one of the principal jousters. The four others implicated in the plot, were tried on Friday 12 May. Despite lack of evidence all four men were found guilty. Thomas Boleyn sat on the jury and effectively condemned his own daughter by finding the men guilty.

Anne was pre-judged for the earlier convictions of the men found guilty of adultery with her, therefore she stood trial before her brother. George stood trial a few hours after Anne on Monday 15 May. As Anne had been found guilty before George had stood trial he too was pre-judged because he could hardly be acquitted when his sister had already been found guilty of incest. Everyone who witnessed George's trial, including the Imperial Ambassador Eustace Chapuys, confirmed that he put up a magnificent defence and many thought he would be acquitted. There was no evidence of incest save that on one occasion he had spent a long time alone with Anne. He was found guilty and the sentence to be hanged, drawn and quartered, but was later changed to beheading. He asked for his debts be paid out of his confiscated assets so that no one would suffer from his death.

George Boleyn and the other four men were beheaded on Tower Hill on the morning of 17 May 1536. George's scaffold speech was extremely long and exemplified the orator's linguistic skills. For it to have been recorded in as much detail as it was, the vast crowd who witnessed the executions must have been virtually silent.

Following the Boleyns' deaths, Cromwell boasted that he had gone to a great deal of trouble arranging the plot, suggesting he did so in order to assist an alliance with Spain. Yet despite his boasts, during the same conversation he greatly praised both Anne and her brother for their sense, wit and courage.

Other Faces of Anne BoleynEdit 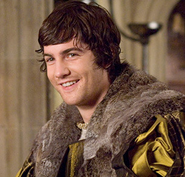 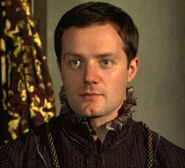 The Tudors
TV Show (2007 - 2010)
Add a photo to this gallery
Retrieved from "https://reign.fandom.com/wiki/History%27s_George_Boleyn?oldid=34550"
Community content is available under CC-BY-SA unless otherwise noted.