Catherine of Aragon was the 1st wife of King Henry VIII, and Queen of England for 24 years until he broke away from the Catholic Church and divorced her in favour of the much younger, Anne Boleyn. She was the mother of Mary Tudor, future Queen of England.

During her upbringing Catherine was well educated. She was an avid reader and trained in needlework, dancing, lacemaking and embroidery in the black-work style.

Catherine loved and respected her mother Isabella. She grew up to be much like her – in looks and character. Isabella was able to turn a blind-eye to Ferdinand’s many infidelities, as did her daughter years later with her second husband, Henry Vlll.

Henry Vll, to stabilize his reign and cement him as king of England, needed an alliance with a powerhouse. Henry Vll had issue with France as did the Spanish monarchs. An alliance would benefit both.

The instability of the recent kings of England’s made her parents reluctant to align themselves with England. However assistance against France from England was more important to her father than his own daughter’s safety.

In December 1487 Catherine's future-mother-in-law wrote to there own mother asking to be kept informed of the health and safety of Catherine – ‘'whom we think of and esteem as our own daughter.’' On 27 March 1489 a treaty was singed, promising baby Catherine of Aragon, and Arthur, Prince of Wales, with a dowry of 200,000 crowns. (Aprox. £5M or $7.7Million)

On 19 May 1499 a by proxy marriage for Arthur and Catherine had taken place. At this point the only thing that was stopping the Spanish sovereigns from sending their daughter to England was the threat of the Earl of Warwick. Catherine's father insisted he would not send his daughter unless Edward, Earl of Warwick was eliminated. Edward was first cousin to the Queen, and she adored him. The future of the Tudor dynasty was with the death of her beloved cousin. Catherine always felt responsible for the death of the young Earl of Warwick.

21 May 1501 Catherine left for England. She arrived in Corunna 20 July 1501 but could not embark due to winds until 17 August. The weather was so unfavourable that they were forced to return to Spain and dock until late September. Five days later she arrived.

The couple met on 4 November 1501 in Hampshire. Arthur did write to his parents-in-law that he would be "a true and loving husband" and told his parents that he was immensely happy to "behold the face of his lovely bride". The couple had corresponded in Latin, but found that they could not understand each other, since they had learned different pronunciations. Ten days later, on 14 November 1501, they were married at Old St. Paul's Cathedral. A dowry of 200,000 crowns had been agreed, and half was paid shortly after the marriage.

Once married, Arthur was sent to Ludlow Castle on the borders of Wales to preside over the Council of Wales, and his bride accompanied him. The couple stayed at Castle Lodge, Ludlow. A few months later, they both became ill with the sweating sickness. Arthur died on 2 April 1502; Catherine recovered to find herself a widow.

King Henry VII not wanting to return her dowry, so it was agreed that Catherine would marry Henry VII's second son, Henry, Duke of York, who was five years younger than she was. However the death of Catherine's mother, meant that her "value" in the marriage market decreased. The marriage was delayed until Henry was old enough, but her father procrastinated so much over payment of Catherine's dowry that it became doubtful the marriage would take place. She lived as a virtual prisoner at Durham House in London. She had little money and struggled to cope, as she had to support her ladies-in-waiting as well as herself. In 1507 she served as the Spanish ambassador to England, the first female ambassador in European history. While Henry VII and his councillors expected her to be easily manipulated, Catherine went on to prove them wrong.

Marriage to Henry depended on Pope Clement VII granting a dispensation because canon law forbade men to marry their brother's widow. Catherine testified that her marriage to Arthur was never consummated as, also according to canon law, a marriage was not valid until consummated.

Catherine's wedding took place on 11 June 1509, 7 years after Prince Arthur's death. She married Henry VIII, who had only just acceded to the throne, in a private ceremony at Greenwich Church. She was 23 years of age. The king was just days short of his 18th birthday.

12 days later, the traditional eve-of-coronation procession to Westminster was greeted by a large and enthusiastic crowd. As was the custom, the couple spent the night before their coronation at The Tower of London. 2 days later, Henry VIII and Catherine were anointed and crowned together in a lavish ceremony at Westminster Abbey. In that month that followed, many social occasions presented the new Queen to the English public. She made a fine impression and was well received by the people of England.

Other Faces of Catherine of AragonEdit 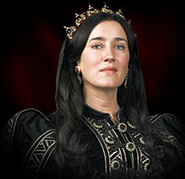 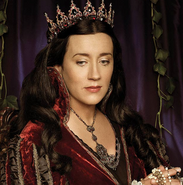 Retrieved from "https://reign.fandom.com/wiki/History%27s_Catherine_of_Aragon?oldid=36300"
Community content is available under CC-BY-SA unless otherwise noted.