View source
watch 01:33
Wiki Targeted (Entertainment)
Do you like this video?
Play Sound

"You know you could sell the ocean a cup of water."
—Louis Condé

Queen Mary: Unfortunate my husband isn’t giving me what I want. So I’ve come to ask you instead. [1]

Louis Condé: A minister much beloved by his flock. The people know nothing of the dire threat he has made. If the minister is killed, the people can use his death as justification for almost any bad act. They would create...
Queen Mary: A martyr.
Louis Condé: And his death would inflame even the most pacifist of Protestants. [2]

Louis Condé: You know you could sell the ocean a cup of water. [3]

Louis Condé: Mary you're not even armed. (pulls out a knife) Good Lord! [4]

Queen Mary: Kill them, and let them burn with their sins. [4]

Louis Condé: When I’m near you, I am aware of every breath you take. And when I’m away, even the wind in the trees reminds me of you. [6]

Queen Mary: You gave me back my life. Now let me save yours. [9]

Queen Mary: We can’t risk meeting again.
Louis Condé: For the rest of ours lives.
Queen Mary: I hope that your is a long one. Go. Live. [10]

Louis Condé: My treason was in loving you. [10] 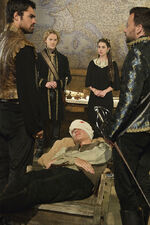 Pages relating to Condé and Mary are the following: