Anne Boleyn was the second wife of King Henry VIII. Her marriage to him lasted for three years until he had her beheaded in favour of a new wife, going as far as accusing her of adultery, incest and witchcraft; the latter not proven. They originally courted each other for seven years while he was married to Catherine of Aragon. During their courtship, he stayed exclusively loyal to her and never took another mistress or went back to his wife. She is the mother of his second daughter, Elizabeth Tudor.

Anne Boleyn was a Lady-in-Waiting for Catherine of Aragon while she was still married to King Henry VIII. Henry soon took an interest in Anne who reciprocated his feelings but refused to be another one of his mistresses. A Year into their courtship, Anne demanded he end his marriage to Catherine before she became sexual with him.

Henry agreed, but in order to do so, ended up breaking away from The Catholic Church after Pope Clement VII refused to give him an annulment. He married Anne soon after.

Fated - (Mentioned)
King Henry II of France demanded Mary Stuart take the crown from her cousin Elizabeth Tudor since the latter was considered the bastard of King Henry VIII and Anne Boleyn as their marriage was never recognized by The Catholic Church.

Inquisition - (Mentioned)
Pietro de' Medici made a reference to Queen Catherine about the time some of King Henry VIII's wives practiced laying their head on the chopping block before their execution.

Tasting Revenge - (Mentioned)
Queen Catherine mentioned how The Boleyn Sister worked together and it worked out for only their father. Catherine was referring to Anne and Mary Boleyn. Mary was Henry VIII's mistress, although Anne Boleyn refused. Years later Anne refused to sleep with King Henry until he divorced his first wife and married her. Anne later gave birth to Elizabeth Tudor. However Henry beheaded Anne, and Mary had left court years earlier.

Betrothed - (Mentioned)
Robert Dudley and Queen Elizabeth are fooling around in a cell. Robert remarks how he remembers when the walls of a prison would have had you cowering in fear. Elizabeth adds how another one of her fears was losing her head, like her mother.

Wedlock - (Mentioned)
Amy Dudley warns Robert Dudley if he tries to divorce her, she will tell the world that Elizabeth is with child, and she will lose her throne. Betting they'll find a way to take her head, just like her mother. in return, Robert threatens to kill his wife.

Bruises That Lie - (Mentioned)
Queen Elizabeth mentioned to Lady Lola how royals have strange family loyalty. Bringing up how her father cut off her mother's head, and her sister had her jailed.

To The Death
Queen Elizabeth has another nightmare about her mother's death.

During a celebration for the 50-year mark for King Henry VIII's 50 Year Coronation Celebration, Anne's former best friend Beatrice Somerset and Lady Lola were both arrested. While in The Tower of London, Beatrice Somerset told Lady Lola the story of Anne Boleyn and King Henry VIII. She asked Lola if she'd heard the stories, the lady who sold out her dearest friend and infant daughter. She told outlandish tales Anne was guilty of witchcraft and other depravities. Because everyone knew Henry wanted her gone, so to speak ill of Anne was to curry favor with the King. Anne's chambermaid claimed to have seen Anne and her brother George Boleyn together. But King Henry knew no one would believe it unless it came from someone like her, a close friend to Anne. After the trial, Henry awarded her The Boleyn family lands. Henry knew the chambermaid's story was a lie. The only thing Anne was ever guilty of was not having a son. She adding she always wished she could speak with Queen Elizabeth to explain about Anne.

Three days after Beatrice was allowed to leave with her head after she gave back The Boleyn land she had been given 22 years earlier.

Leaps of Faith - (Mentioned)
Lady Lennox told Mary Stuart that what Mary see as a solution for peace, she see as her demise. After Queen Elizabeth's mother, Anne's execution, after her sister Mary Tudor imprisoned her, even after the most recent attempt on her life, Elizabeth will never rest easy. It is not in her nature.

Hanging Swords - (Mentioned)
Gideon Blackburn asked Queen Elizabeth is what she told his daughter, Agatha Blackburn about heaven came so easily to her was because it's what she told herself as a child. Elizabeth confirmed her father, King Henry VIII wanted little to do with her, and her mother, Anne was killed before she turned three. Later her sister, Mary Tudor locked her in The Tower of London and accused her of treason, and she never knew if they were coming for her next. So she told herself that story so she wouldn't be afraid.

Pulling Strings - (Mentioned)
Queen Elizabeth brought up how her father, King Henry VIII killed her mother Anne Boleyn so he could re-marry because he wanted a son in Edward Tudor.

A Better Man - (Mentioned)
Elizabeth and Gideon are talking about her upcoming Birthday Celebration, and Elizabeth wants a husband "who will not have her head removed.' This is a reference to her father, King Henry VIII having her mother, Anne Boleyn beheaded.

A Bride. A Box. A Body. - (Mentioned)
Queen Elizabeth professes her love to Gideon Blackburn in a secret church nuptuals. She vows to him, but to God. And woven into this fabric from her mother's dress are her dreams of lasting love for Elizabeth. She tells him the joy she would have felt knowing she'd met Gideon.

Other Faces of Anne BoleynEdit 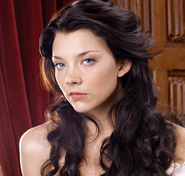 Retrieved from "https://reign.fandom.com/wiki/Anne_Boleyn?oldid=43664"
Community content is available under CC-BY-SA unless otherwise noted.